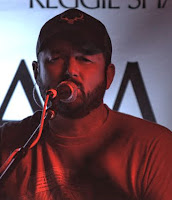 I decided to shake things up a bit this week. What I mean is, I always felt that I had an eclectic taste in music that ranged from disco (yep I said it) to alternative rock, to pop, to grunge and so on. However, I never really had a taste for country music. There are a few exceptions such as some country “rock” that I will listen to on occasion. Usually this occasion takes place when I ride along in a friend’s car who is listening to country. I try to remind myself that it isn’t my car and therefore I can’t change the station or jump out of a moving car whenever I like, so I best find something in the music that I can enjoy. Sometimes I can, most often I cannot. I know, I know what good could possibly come out of this review now? Well stick around, because you see, my lack of country music taste is about to turn Reggie Shaw the most important music review I have ever done.

Before arriving, I did some research on Mr. Shaw, you know, the typical website and Facebook stalking. His website is a very impressive resume, a bio outlining performances in Nashville and working with bands such as Rascal Flatts.

Reggie Shaw performs at a lounge in west Omaha off 175th L, Copacabana Cocktails & Cigars. The Copacabana was a very different type of bar, cigars and drinks with laid back leather chairs and low tables and dim lighting.

Reggie was in comfortable attire consisting of jeans, ball cap and a well-worn, red Bud Wiser t-shirt. Reggie and his accompanist David Kotinek arrived about 15 minutes before the show to set up their stage that consisted of a backdrop, mics and speakers. I kept thinking to myself, where is the drum kit and steel guitar? Reggie and Dave, with their harmony and acoustic guitars, had me completely blown away. The first song played was “What Was I thinkin’”(Written by Deirks Bentley) and then a string of rock n roll songs followed. Reggie performed my favorite Tom Petty song, “Mary Jane’s Last Dance”. I smiled as I sung along even enjoying the country style genre of it all. Reggie and Dave sang a few more covers before taking a quick break. I took that as my que and went to introduce myself. 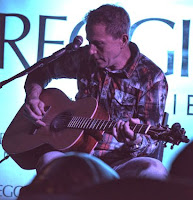 I approached David Kotinek first, we shook hands and I disclosed who I was and he asked me a bit about Nightlifeco as well as my own blog site, Penny Pepperstein. Dave had a pop and rock n roll cover band back in the 90’s called Hat Trick, spanning a decade or more and performing in various Omaha venues. We chatted bit longer and then I turned my attention to Reggie, he was very nice, down to earth and even gave me a hug. He asked to meet my husband and we headed toward our table. They shook hands as Reggie explained he was heading to Nashville to finish work on an up and coming album.  After our brief chat Reggie and Dave headed back toward the front of the lounge. He continued to entertain us with his (along with Daves) voice, guitar style and his own excitement to perform.

Here I was, a non-country music listener, enjoying and engaged in the music of this country singer. During the set, Reggie sang an original he wrote titled “Country Music Church” about a singer who wrote songs for the down trodden, brokenhearted people that asked him to please write of their woes. I smiled as the song was exactly what I always felt was the typical country music song, “Lost my wife, my car, house and dog” but this had more to the story and I found myself loving the lyrics as well as the music. I didn’t stay for the entire set as it was getting late and I wanted to get started on this article. When I got home I looked for the song "Country Music Church" on Reggie's website and noticed there was an entire album of songs to hear.

The next morning I listened to the other songs on Reggie’s site and I can honestly say that a couple are a little too, well…country for my liking. But with that being said the other 8 songs I have already downloaded to my mp3 player. My favorite is the song written for his grandpa titled “I’m Gonna Miss Him” and hell if it didn’t make me miss my grandpa too, Reggie had struck a chord with me as I felt that pain once myself.

Thanks to Reggie, I have broadend my horizons a bit and may review a few more country artists in and around Omaha. Don’t get me wrong here, my loyalty lies with rock n roll but Reggie's cover of Bob Segar, Journey, Tom Petty etc...collided with a country sound helped when he sang his own songs because I was much more open minded. Well done Reggie, well done.

This was a great night and I will definitely be back. Join me, especially if you are looking for a place to smoke a cigar and see Reggie Shaw. The Copacabana Cocktail and Cigar was a little smoky (as we knew it would be) but the drinks were well made and that “Casablanca” feel, you know the one, that feeling that you might see "Bogie" at the end of the bar or "Sam" on a piano, was entertaining in and of itself. So with the combination of Reggie Shaw and Dave Kotinek I can honestly say that for me, “Louie, this could be the beginning of a beautiful (country music) friendship” Here’s hopin’.

Before I close, I want to express my appreciation to you all for taking the time to read my articles. If you know a place in Omaha that has live music that I should see, do not hesitate to send the suggestion to my Facebook https://www.facebook.com/Penny-Pepperstein-Rock-and-Roll-Journalist. You may see your name in the next Penny article featured in Nightlifeco.com

This is Penny signing out. See you soon, see you there!

**This just in! Reggie Shaw is moving back to Nashville on July 2nd. He has been offered a VP position for a new company called Big 3 Music Group! And has been recently signed a publishing deal!! Now this is what it's all about!**