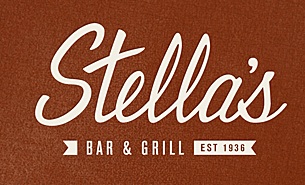 Stella's is a restaurant rich in tradition and history. To be sure, the name "Stella's" was not randomly selected, but is the name of our Founder, Estelle Francois Sullivan Tobler, Bellevue's first tavern owner, a mother who raised her four children alone, and the creator of the famous "Stella Hamburger."

Stella and her first husband, Al Sullivan, moved to Bellevue in 1930 to operate a service station that her uncle built, located on the corner of Betz Road and Lloyd Street. The couple lived in a small house nearby. Stella soon converted one room of their three-room house into a tavern, originally named "Francois and Sullivan" & sometimes referred to as "Grandma's." The 12 by 15 ft room couldn't accommodate very many customers, but "in those times, they'd take their bottles outside," Stella said. She purchased her first beer license for $50 & first tobacco license for $2. At one point, another tavern opened within a couple blocks, and after two owners unsuccessfully attempted to get the business going, the building was offered to Stella and in 1939, she moved into bigger quarters. Sadly, Stella's husband died that same year leaving her with four children to raise on her own, as well as two businesses to operate. It was 20 years before Stella married her second husband, Dean Tobler.

As business continued to flourish, Stella attempted to purchase the land upon which the tavern was located, but her landlord refused to sell. In 1949, she purchased the land at the current location which had once been a dairy farm. She then had the building moved there on Friday the 13th of May 1949 and renamed the tavern, simply "Stella's." The new location was ideal since it was located next to a drive-in theater and car race track. It's the "World Famous " cheeseburgers and the down-to-earth friendliness that continues to set Stellas apart from a state full of burger joints. The burgers are good and, well, greasy, and that's part of what makes them good, and so real. The hamburger meat is fresh, never frozen, rolled into a 6 ½ ounce ball, and hand pressed onto a cast iron grill. The burgers are served on paper napkins and the freshly cut "Stella Fries" are served in plastic bowls lined with waxed paper. Stella's philosophy was, "Good food doesn't need to be fancy." Stella's attained it's world famous status, thanks to the millions of Offutt AFB airmen and officers who've frequented our establishment throughout the 74 years it's been open, and subsequently spread the word at Air Force bases internationally. Although a heart attack claimed the life of Stella on April 3, 1985, her picture is still prominently displayed in the bar, with legend "Our Founder" written on it. She was a remarkable lady, who built a successful business based on integrity, hard work, and a willingness to serve others. Her philosophy in life was "Help others out of the kindness of your heart, without expecting anything in return." Her son, Al Sullivan and his wife, Mary, took over full-time management in the mid-1970's when Stella suffered a stroke and her doctor advised her to slow down a bit. Al & Mary continued Stella's legacy until they retired in June 2007 and sold the business to their cousin, Stephanie Francois, who is Stella's Great Great Niece. Even though Stella's underwent a much needed facelift upon change of ownership, we still maintain Al Sullivan's philosophy, "If it ain't broken, don't fix it." The same "World Famous" burgers and fries are still being served today because the family secrets were handed down, and the original well-seasoned cast iron griddle is still in use.

Special thanks to all our loyal customers and wonderful staff... we have enjoyed great successes during the last two years... "Best Burger in Omaha" on KETV's A-List (two years in a row); "Best of Omaha" in the Burger Category (3rd place last year & 1st place this year); "Best 100 Burger Places Across the US"; and Voted Top 20 Burgers in US by Gourmet Magazine.

No daily specials have been added. If you're the venue owner contact us to get started.
No upcoming events. Add your event.

No articles have been posted about Stella's Bar & Grill. Contact us to add an article.